No one ever wrote about Video Killing the Mobile Device Star, and The Spirit of Mobile Devices is also out of the question. We daresay that Mobile Device Free Europe doesn’t quite have the same ring to it. Songwriters like Beyonce will surely continue to wax poetic about Radio, but the latest data shows that mobile devices have taken the lead when it comes to time spent consuming audio.

The devices we choose for listening are inextricably linked to the types of audio we consume, and America’s listening has shifted to mobile phones, a trend that we have been observing for years. Our latest Infinite Dial study shows that 88% of Americans age 16+ own a mobile phone, and as the availability of audio apps and podcast apps has increased, so has consumption on a mobile phone. 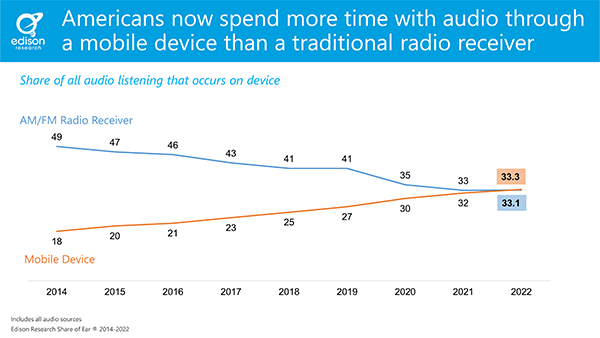 As of Q4 2021, radio receivers still had the slightest edge over mobile, with 33% of all audio being consumed on a radio and 32% on a mobile phone. With the latest release of Q3 Share of Ear data, consumption of audio on a mobile device just passed radio receiver consumption, 33.3% to 33.1%.

Be sure to separate the content from the device when interpreting this data. This graph doesn’t reference radio content, which can also be consumed via smart speakers, radio station apps (also on a mobile phone), SiriusXM receivers (also a form of radio content) or smart TVs. It references the hardware – actual radio receivers.

Mobile devices are multi-media devices, providing content from many sources. Radio receivers with their single-use functionality and near-impossibility to find outside of cars, just have not been able to compete.