Society has long fretted about technology’s impact on youth. But unlike radio and television, the hyperconnected nature of social media has led to new anxieties, including worries that these platforms may be negatively impacting teenagers’ mental health. Just this year, the White House announced plans to combat potential harms teens may face when using social media.

Majorities of teens say social media provides them with a space for connection, creativity and support … 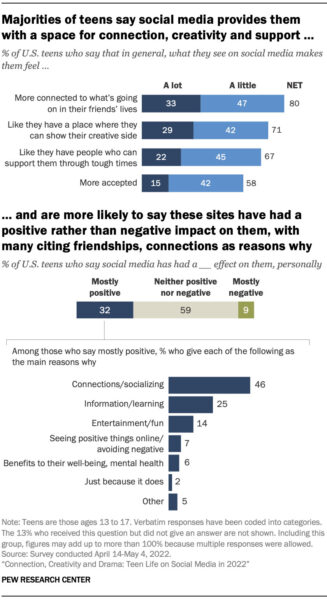 Despite these concerns, teens themselves paint a more nuanced picture of adolescent life on social media. It is one in which majorities credit these platforms with deepening connections and providing a support network when they need it, while smaller – though notable – shares acknowledge the drama and pressures that can come along with using social media, according to a Pew Research Center survey of U.S. teens ages 13 to 17 conducted April 14 to May 4, 2022.1

Eight-in-ten teens say that what they see on social media makes them feel more connected to what’s going on in their friends’ lives, while 71% say it makes them feel like they have a place where they can show their creative side. And 67% say these platforms make them feel as if they have people who can support them through tough times. A smaller share – though still a majority – say the same for feeling more accepted. These positive sentiments are expressed by teens across demographic groups.