There’s no stopping the music industry’s digital transformation, based on recent research. According to data from the International Federation of the Phonographic Industry (IFPI), digital music revenues worldwide rose nearly 7% last year to hit $6.85 billion, tying physical sales in share for the first time, at 46% each. The remaining 8% was from performance rights and synchronization. 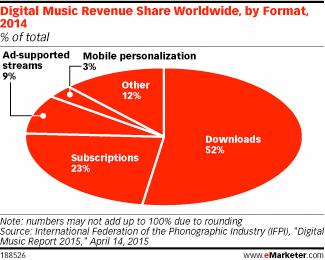 Just like in the US, IFPI found that streaming services—made up of subscription and ad-supported streams—were a key driver of global digital music revenues, accounting for 32% of the total, compared with a quarter in 2013.

Subscription services were the star when it came to digital music revenues, rising 39.0% globally last year to $1.57 billion. This equates to nearly one-quarter of digital music revenues, vs. 18% in 2013. IFPI estimated that the number of people who paid for music subscriptions last year was 41 million, up 46.4% year over year. However, ad-supported streams rose even faster, with growth coming in at 38.6%. 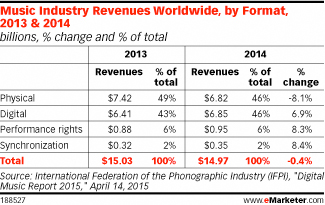 Digital revenues worldwide maintained positive growth last year thanks to the huge rise in streaming revenues—and despite the 8.0% fall in download sales, which accounted for 52% of the total. This trend is consistent with that seen in the US, where digital download sales dropped 8.7% last year and streaming revenues rose 29%, according to the Recording Industry Association of America (RIAA).

However, digital’s rise wasn’t enough to boost music industry revenues globally last year, as IFPI found sales remained relatively flat at about $15 billion.
As digital continues to expand its share of music industry revenues worldwide, advertisers would be wise to take advantage of the big success story this past year: streaming services.