Findings from a new study reveal that multicultural Americans have strong faith in the “American Dream.” In fact, 78% of Black, Asian, and Hispanic American consumers say they have achieved or believe they can achieve the American Dream, as compared to 69% of White consumers. 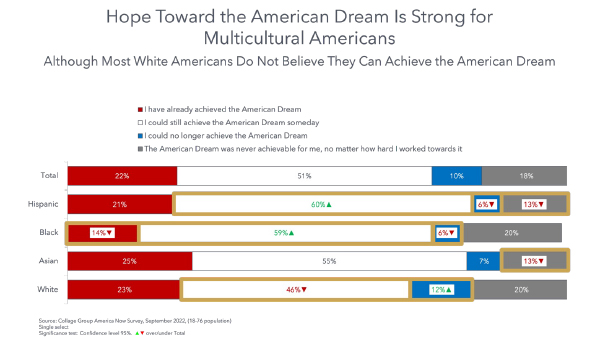 “Both Hispanic and Black Americans are more confident about their futures in comparison to other American segments, and this conviction translates to their faith in pursuing and achieving the American Dream,” said Jack Mackinnon, Senior Director of Cultural Insights at Collage Group. “We also allowed people to select what they think constitutes the American Dream and notably, most Americans define the Dream in practical terms, like owning a home, being able to retire, freedom to live how they want, and a stable family life.”

Conversely, White Americans were not as optimistic, as 12% answered that they could no longer achieve the American Dream. Moreover, White respondents tied with Black Americans in one area, as 20% from each demographic said the American Dream was never attainable, regardless of how hard they worked toward realizing the Dream.

Most Americans, to the tune of 65%, said that they believe the United States is the best country in the world. White Americans led in this category as well, with 69% sharing this perspective. By generation, again Boomers led the way as 82% said the U.S. is the best country.

“Gen Z Americans have a wholly unique take of American exceptionalism, but that doesn’t mean they don’t appreciate the country,” explained Mackinnon. “This generation has had access to greater diversity and a more global perspective from an earlier age than older Americans.”

“Because of these circumstances, this generation is more likely to look outward, and that comes with a more tempered view of their own country’s place in the world.”

The Collage Group report also delved into prevailing social and political issues, finding that multicultural consumers are the most concerned about gun violence. Among Black consumers, 80% said gun violence is serious or a very serious problem. Seventy seven percent of Asian consumers, and 75% of Hispanics consumers, agreed. 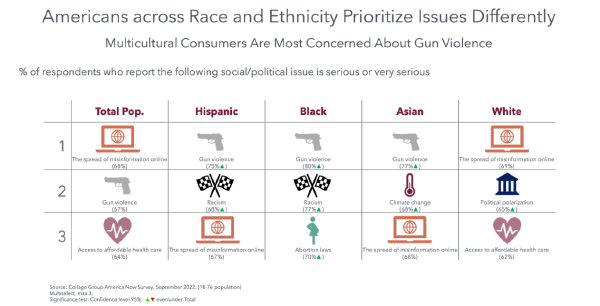 Black and Hispanic consumers were also in sync in terms of racism being a high-ranking area of concern, with 77% and 68% respectively, citing it as serious or very serious.

“Not only do multicultural Americans see racism as a critical issue, but it’s also an area where they want brands to engage,” said Mackinnon. “We see this from younger Americans, too, and in fact, 65% of Gen Zer’s say that racism is a serious issue to them.” 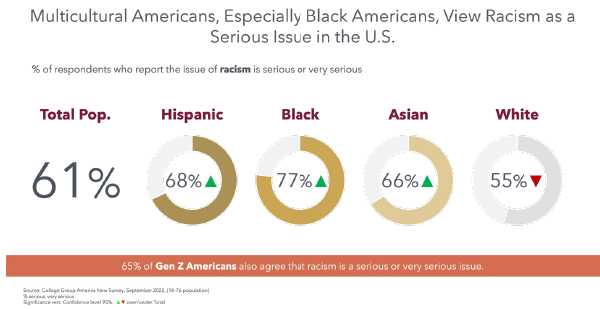 Collage Group’s David Evans, Chief Insights Officer, concludes that brands should pay close attention to the complex mix of perceptions across diverse segments. Brands, he says, must focus on insights pertaining to America, as well as the issues Americans care about and where they show concern.

“While Hispanic, Black, and Gen Z Americans are those most likely to say, ‘we want to see brands engaging in a set of topics we care about,’ – such as racism or climate change – we also see these demographics are engaged and positive about the American Dream in surprising, if not counter-intuitive ways,” said Evans. “Brands need to do the research to understand this phenomenon and how they can activate successfully in this context.