One of the great joys of our Infinite Dial series is we can track items from so far back.  This year we brought back some questions about media in general that we had asked in the past.

Here’s one we didn’t show: We asked “Among the Internet, newspapers, radio and television which one is the least essential to your life?”

Below are the results from the first time we asked in 2002, and from this year’s study: 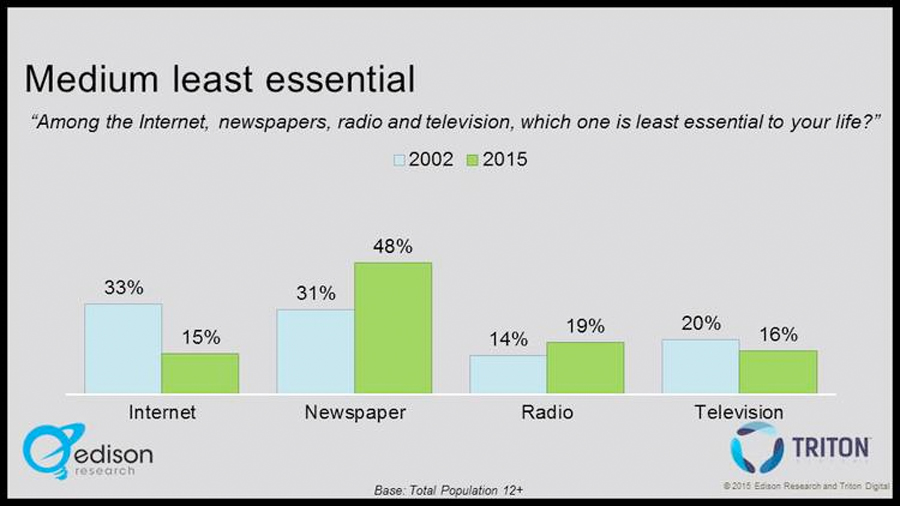 Thirteen years ago, still one-third of Americans ages 12 and over (who now of course would be 25 and older) said the Internet was the least essential to their lives.  Of course, at that time only 57% of households had Internet access in their homes (compared to 85% today).

The obvious point is the dwindling influence of ‘The Newspaper’ on people’s lives, as nearly half our sample says it is their ‘least essential’ of the four.  But as we know, so much of what the Newspaper provided (and provides still) has been subsumed by the Internet.  It’s impossible to know how much the very content that newspaper companies provide to the Internet contributes to the ‘essential-ness’ of the Internet.  Of course when a guy named Craig decided to start a List, and give it away for free, he helped set print into what’s likely an unrecoverable spiral.

Equally interesting to me is the near three-way tie for the ‘least-least’ essential medium among the four. The Internet now has the fewest people saying it is least essential — but it’s about tied with Radio and Television, with less than one-in-five choosing any of these.  Which is just another way of showing that while the Internet has surely ‘changed everything’, it’s print that has been hit by far the hardest.