NBCUniversal Telemundo Enterprises announced the appointment of Sandra Smester as Executive Vice President, Programming and Content Development. In this newly created role, Smester joins the company to oversee the development and execution of programming for the network, beginning in August. Smester will report to Ronald Day, President of Entertainment and Content Strategy at NBCUniversal Telemundo Enterprises. 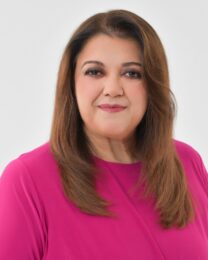 Smester will be responsible for primetime and daytime programming, content acquisitions, program planning and scheduling, and the company’s cable network Universo. She will leverage more than 25 years of experience in programming Spanish-language content for U.S. Hispanic audiences to lead content programming across Telemundo networks. In her role, Smester will be responsible for long and short-term program planning and scheduling, while working closely with future development and current production teams, as well as Telemundo Global Studios.

“Sandra is a world-class media executive and a savvy programmer with a keen eye for great content, a long history of programming innovation, and a deep understanding of the U.S. Hispanic media space,” said Day. “She’s achieved impressive results at every stage of her career and is uniquely positioned to power Telemundo’s continued leadership, overseeing our best-in-class programming serving Latino audiences.”

“I’m thrilled to be joining the Telemundo leadership team in this new role to support the continued growth of the business,” said Smester. “For years Telemundo has offered groundbreaking content, taking risks with innovative programming decisions and bringing a contemporary approach to our industry. I look forward to continuing in that tradition, deepening the connection with their existing audiences and creating new Telemundo superfans along the way.”

A long-time veteran of Spanish language media, Smester most recently served as Executive Vice President and Chief Content Officer at TV Azteca, where she oversaw content and distribution across the network’s linear and streaming offerings, and drove the growth of the company’s share in Mexico, Latin America, Europe, and the U.S. Hispanic market. Previously, Smester was the Executive Vice President and General Manager of Azteca UNO, where she led the broadcast network through its brand transition and unprecedented performance of TV Azteca during the 2018 FIFA World Cup. Prior to that, Smester held a series of leadership positions at Univision Communications, advancing to the role of Executive Vice President of Programming.