Total unit sales of U.S. discretionary general merchandise in 2022 were 7% lower than the prior year, and sales revenue fell 2%, according to The NPD Group. The year closed with a similarly lackluster holiday shopping season. However, December retail sales revenue reached parity with December 2021, which could be seen as a strong finish, given the demand declines that occurred throughout most of the year.

“While holiday season sales usually increase compared to the prior year, the holidays could have and should have been worse this year,” said Marshal Cohen, chief retail industry advisor for NPD. “Double-digit increases in food prices, weather disruptions, early promotions, little depth in discounts, and the absence of innovative products made for a long list of shopping hurdles contributing to the muted holiday and annual retail results.” 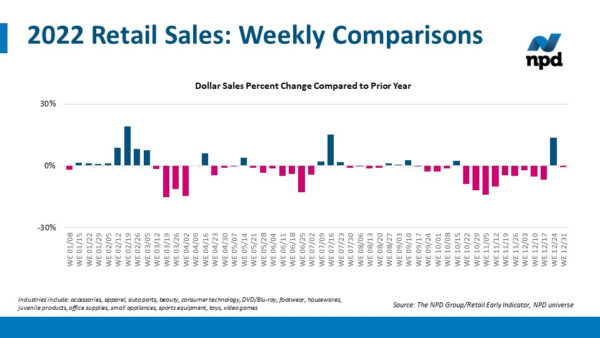 Per U.S. retailer point-of-sale information, 2022 started with eight weeks of healthy performance that took a downward turn in mid-March. Throughout the remainder of the year, only 11 weeks delivered revenue gains over the prior year, with the two highest-selling weeks occurring during the mid-July retail promotions and over Christmas. Higher average prices for general merchandise helped create better revenue results, but those same high prices also cut into already dwindling consumer demand. Unit sales only grew during six of year’s weeks.

“Consumers have increasingly limited discretionary spending power, and limited needs for general merchandise following the pandemic purchasing surge,” Cohen said. “In order to recover from the challenges of the past year, retailers and manufacturers will need to find new ways to elevate the value of their product in the eyes of the consumer.”